After our morning adventure searching for the camel races in the fog, we made it back to Abu Dhabi island just in time for the dhow races.
The dhows have been used for centuries. It is an Arab traditional sailing vessel, with origins in India. Up until the 60s they were making journeys between the Persian Gulf and East Africa, taking dates and fish and bringing back mangrove timber.
Okay, okay, I just got that off Wikipedia. But I knew one of CGMan's buddies (who are all retired Coasties) would tag me if I misrepresented a sailing vessel.
So anyhooie, they had the dhow races this afternoon. I was amazed at the number of them. Each race had about ten boats. Each boat was manned with 14 to 18 men, each with one oar. The length of the race was about 4km ( a long way to be rowing!) through the breakwater between Abu Dhabi and LuLu island.
The series of pictures is not from one race, but from several. It does show the sky line of Abu Dhabi very well. Notice all the construction, its never ending. 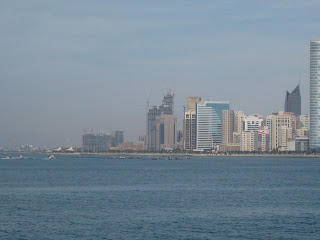 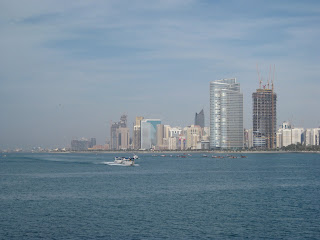 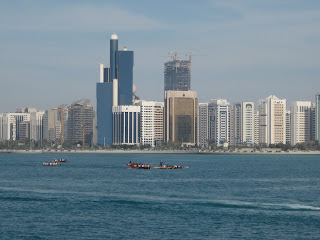 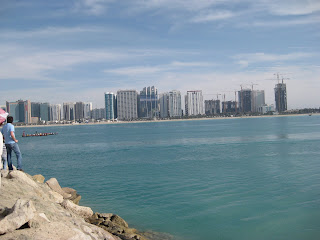 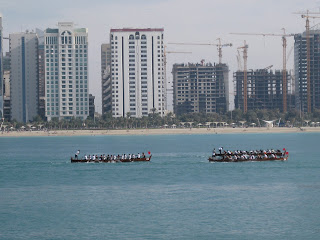 This was about the only close up I got, but at least I was able to count the number of rowers.
So let me tell you about all the tall buildings. It's very obvious, the new and shiny ones. But there are still quite a lot of old, shabby, falling down buildings. They are making inroads to getting those all torn down to make way to build the new and shiny ones. It's so interesting to drive through downtown and see all the highrises, only to look up and see laundry strung across several balconies and air conditioners barely hanging into windows.
I haven't seen it, but CGMan tells me they don't implode buildings here, they use an old fashioned wrecking ball. One afternoon he was almost struck by a piece of falling building. Just another reason I'm glad we're outside of the city.
Here's another interesting fact, 40% of the world's tall cranes are in the UAE. It's amazing the number of projects that are going on at the same time. They have labour camps for the workers that are the size of small towns. Well, they basically are small towns!
Stayed tuned...tomorrrow I have some great pictures of Sheikh Zayed Mosque. Pictures that I took all by myself, with my little point and shoot.
And I'll read up on it over at Wikipedia.
at March 12, 2009